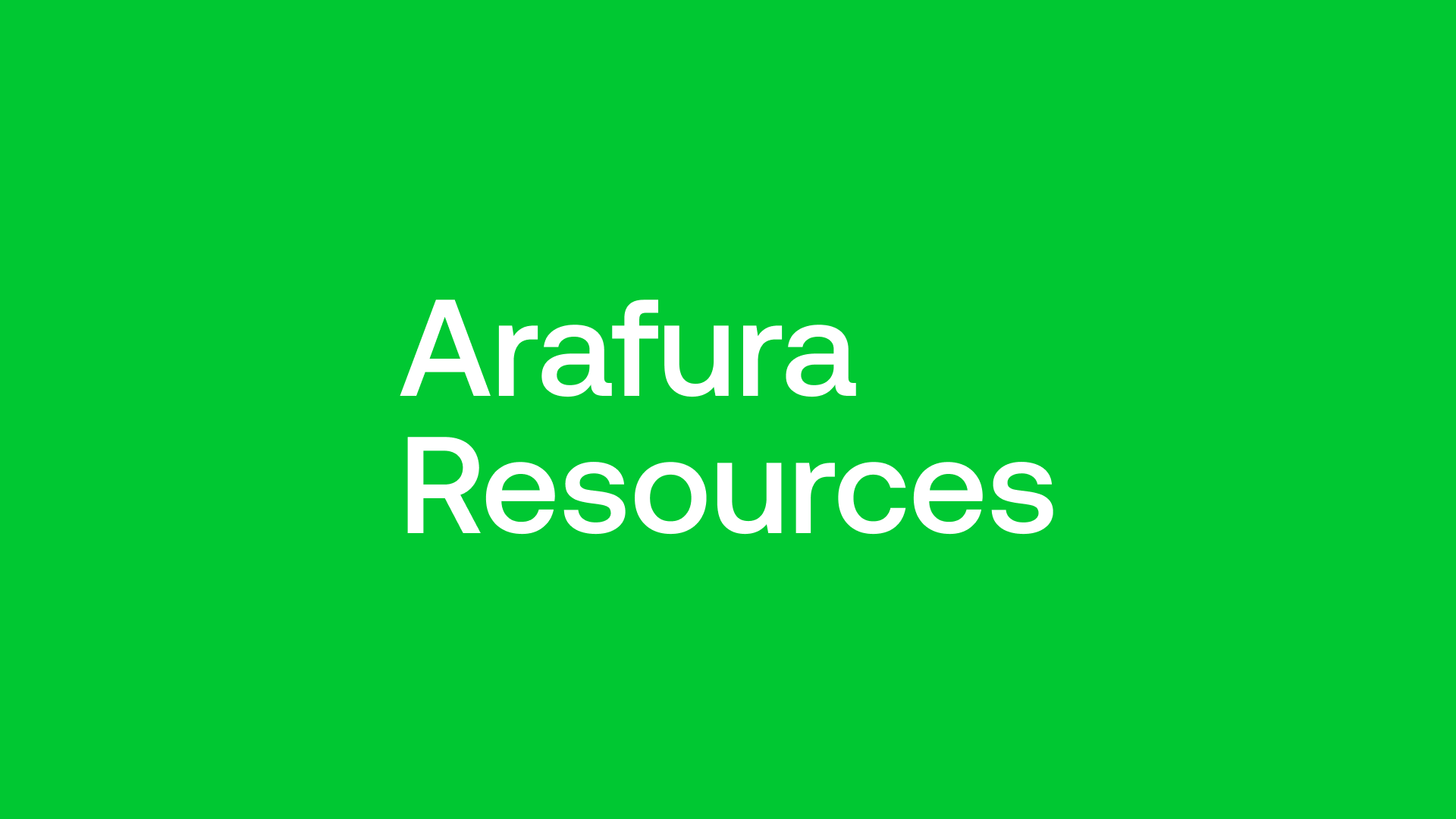 Arafura Resources is an Australia-based company engaged in production of rare earth products. The company produces rare earth products from the Nolans Project. The Nolans Project consists of a mine, process plant, including beneficiation, extraction and separation plants, and related infrastructure to be constructed and located at the Nolans site, approximately 135 kilometers north of Alice Springs in Australia's Northern Territory.

Matt Gordon spoke again with Gavin Lockyer, Managing Director at Arafura Resources. Lockyer gave us another update on the developments at the Nolans Project, a Neodymium-Praseodymium (NdPr) resource in the Northern Territory of Australia.

Arafura Resources is a Perth-based Australian company; its flagship asset is the Nolans Project, a rare-earth-element (REE) deposit in the Northern Territory of Australia. The company trades on the Australian Stock exchange. Recently its share price spiked up, prompting an additional opportunity for Crux Investors and others to take note of the company’s recent developments.

Why REE’s Are Important

REE’s are indispensable to the clean energy revolution. In particular, neodymium and praseodymium (NdPr) are critical raw materials in many non-carbon-burning energy products and systems. REE’s are also important in other industries such as healthcare and aerospace. NdPr are of particular importance in technologically advanced magnets, which are more powerful and a fraction of the size of conventional magnets.

The Nolan Project is 100% owned by Arafura. Apatite, monazite, and allanite, all of which have high concentrations of REE, occur in abundance at Nolans. The asset contains the following JORC-202-compliant ore resources:

The Nolans asset is estimated to contain up to ten percent of the global REE supply for magnets. Upon development, the Nolans Project will comprise a mine and processing plant producing highly refined REE products and fertilizer-grade phosphoric acid for sale.

The mine at Nolans will have a long 38-year lifespan. Arafura is engaged in bringing this secure, globally important resource to market as soon as possible.

Why The Rise In Stock Price

Lockyer believes that the shortages in REE’s and in semiconductor chips have begun to impact the marketplace.  A lot of the Europeans have come back from their summer holidays and they are starting to put in place their procurement strategies for the next few years, particularly for strategic materials such as REE’s. Additionally, a lot of interest is coming out of South Korea and Japan as well. Importantly, the recent Bloomberg article about shortages in the auto sector has brought in a surge of renewed interest.

Another driver at the moment is that the NdPr price has been sitting above $90/kg for quite some time. Prices like this haven’t been seen for a good while. Most analysts globally would say that new NdPr projects need a price of about $65/kg to get them funded. This could also account for renewed interest in Arafura.

The Influence of the US and the UK

Indeed, just a few days after the Bloomberg article, the Australian government announced that they are earmarking $2 Bn for critical minerals and rare earths in particular. This came on the heels of high-level discussions with the US and the UK regarding supply concerns.

It is becoming clear that the REE sector is extremely important to the world as it comes out of post-COVID recovery, particularly in the manufacturing sectors. Projects like Nolans are few and far between. Indeed, Nolans is one of the very few REE projects on the globe that is shovel ready.

The Australian government just gave Arafura two letters of support, indicating that $200 M has been earmarked for Nolans and would come out of that $2 Bn fund. At this time, to be clear, these letters of intent are conditional and non-binding. Additionally, Arafura has received another letter from the Northern Australia infrastructure fund indicating an additional $100 M in funding support.

Arafura intends to use these funds to bring the REE at Nolans to the export market. Potentially, the company will likely receive additional support from Export Credit Agencies (ECA’s) from the EU, South Korea, Japan, and other jurisdictions.

In essence, Australia is saying that it knows the world needs these key mineral supplies and that they are doing their part to help open these markets up. It is clear that Australia, the US, the UK, and other western countries are trying to secure sources of REE outside of China.

Arafura’s Role in the Australian Earmarking

A few years ago, the Australian government set up a critical minerals facilitation office. Arafura has been in regular contact with this office and with other government agencies to make sure that they understand, from an industry perspective, exactly what's needed and required by Arafura in general and strategic mineral suppliers in Australia in general. Lockyer believes that some of the conversations that he has with Australian government counterparts has had a direct effect on the recent funding announcement.

The next step for Arafura is to work on creating a credible and robust offtake program with global companies in the semiconductor, auto, and other sectors. The electric vehicle (EV) sector in particular has really woken up to the fact that they need to secure long-term REE supply from sustainable and reliable sources. Arafura is now seeing a lot of interest in its REE product.

Arafura is now at a point where it’s having discussions about offtake volumes and pricing. Some of these potential deals could involve strategic equity investments intended to secure longer-term contracts at reasonable prices.

China is the big elephant on the table driving many of these discussions. There's been strong EV growth this year, much of this from China. Their prowess is kicking in to the point that Chinese companies are set to become net importers of NdPr, probably within the next 2 years. Automakers are starting to realize that they need to act sooner rather than later to secure their supplies. When you look around the world, there's limited supply opportunities for large REE projects that are ready to go.

That being said, Lockyer indicates that Arafura is under no pressure not to supply to the Chinese. However, Arafura’s business model is to try to focus on offtake partners in traditional Western countries. China produces 85% of the global REE supply and Arafura did not want to compete with them in their own backyard. The rest of the world definitely needs suppliers like Arafura.

Update on the Technical Plan and other Timetable Issues

Arafura is targeting the middle of 2022 for its Final Investment Decision (FID) at Nolan. Part of this timetable revolves around some of the technical work that still needs to be done. The company simply cannot rush the front-end engineering and design any faster, even if it had all the money in the world to spend.

The company has appointed Hatch, Ltd. as its hydrometallurgical specialists to undertake the front-end engineering design work. That is probably a 6- to 9-month exercise, which has already commenced.

As Arafura gets growing confidence in the engineering plan, it will start talking to construction companies. When the company is FID ready, this time next year, Arafura envisions getting a fixed-price engineering and procurement (EP) contract or an engineering, procurement, and construction (EPC) contract. Both the banks and the government agencies would be involved.

In addition to Arafura’s internal EPC timetables, there are other aspects that are simply out of Arafura’s direct control. One of these is the supply efficiency of the procurement departments of large billion-dollar companies. Another is the continuing working relationship with Australian government agencies, which may not always move as fast as desired.

Things are moving along at the Nolans Project. The Australian government and other Western countries have stepped up. Lockyer believes that Arafura is doing the things that need doing in order to get this strategic REE resource to market as efficiently as possible.

To find out more, go to the Arafura Resources Website