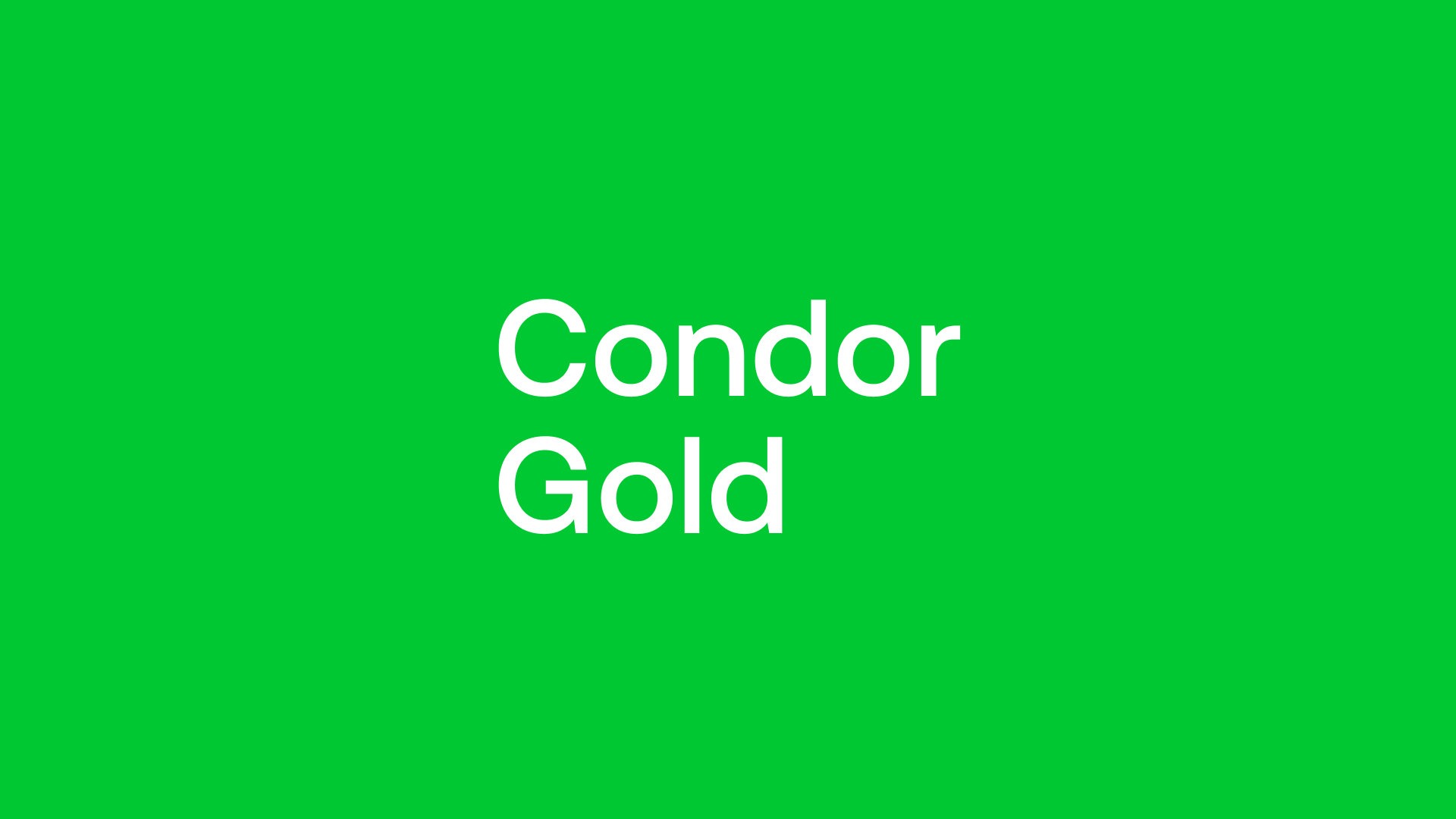 Condor Gold Plc is a UK based exploration company focused on developing and further proving a large commercial reserve on its 100% owned La India Project in Nicaragua which is a 2.3million oz resource. In August 2018 Condor Gold received an Environmental Permit for the development, construction and operation of a processing plant with a capacity of up to 2,800 tonnes per day and associated mine site infrastructure at La India. From day one of production, Condor Gold aims to be a 100,000oz gold producer per annum, ramping up to 150,000oz per annum.

Matt Gordon caught up with Mark Child, Chairman and CEO of Condor Gold, a company with a fully permitted 2.3 Moz gold resource in Nicaragua. He reviewed the work being done to get that precious metal deposit into a production mode as quickly as possible.

Condor Gold plc is a UK-based gold exploration and development company with a focus on Nicaragua in Central America. The company is engaged in developing and further proving a large commercial reserve on its 100% owned La India Project in Nicaragua.

The company trades on the Toronto Venture Exchange and the London AIM Market.

Why Is Condor Gold in Nicaragua?

Nicaragua may be a difficult jurisdiction in the minds of some investors. Actually, the government is supportive of mining, offering 25-year exploration and exploitation concessions, and a favorable tax regime. Gold was the country’s largest export in 2020. Infrastructure is not an issue.

Child indicated that Condor is there firstly because it owns highly prospective gold assets there. In addition, business is moving along well. They have purchased a mill, which is now 80% in the country, and the regulators are fully cooperative and on-board.

In fact, Child recently had a one-on-one meeting with the Minister of Energy and Mines. That was followed up with a three-hour meeting with the main Minister. The discussions were focused around the mill that is coming to fruition and the authorities were quite pleased that things are really beginning to happen. In addition, drilling and site preparation is continuing at the mine site.

The company has a two-pronged growth plan at La India:

·         The continuation of an exploration program with the intent to expand mineral resources by 1M oz. of gold and prove a major gold district of 5 Moz gold.

Feasibility Studies and the PEA

Condor Gold likes to talk in terms of the data in its feasibility studies and preliminary economic assessment (PEA).  Its PEA tells investors that the company hopes and is likely to produce 150,000 oz. of gold per annum for 9 years. Assuming $1,700/oz. for gold, that gives a net present value (NPV) of $418 M in one scenario, an NPV of  $300 M in a slightly smaller production scenario.

The company is about two-thirds of the way through its feasibility study (FS). It is on track to be delivered in Q1 of next year.

As of October 2021, the HUI gold bank index is down 50 percent from its high a year ago.  That's the main index in the junior gold sector. Child is not going to dismiss the obvious effect that this pullback has had on junior gold producers. He is concerned that when these companies need to raise money, it may be a bit on the expensive side compared to last year.

Nevertheless, the company has strong support from the shareholders to raise needed funds. The directors of the company own 22% of the company’s shares. Jim Mellon, a noted British businessman and philanthropist, owns an additional 8.5% of the shares and is extremely supportive.

Child believes that currently, gold is in a base-forming price mode. He anticipates that gold will go materially higher over the next two to five years, particularly considering current real interest rates and the massive amount of sovereign debt in the world.

Condor purchased a complete new semi-autogenous mining (SAG) mill package for approximately US $6.5 M from First Majestic Silver. This mill is expected to process some 2,300 to 2,800 t/d. A ball mill addition is envisioned as well, which would increase capacity to about 4,000 t/day.

Condor Gold envisions a two-stage production model for its gold resource at La India.  Stage One is open-pit; Stage Two basically adds the underground portion of the mine as well. In the first stage, the company can comfortably produce 100,000 oz. each year. Then, using the cash flow from the first stage and without having to go back to the markets, it can finance the underground development to unlock further resource.

Furthermore, a ball mill will be added using future internal cash flow to increase milling capacity. The base case of 100,000 oz. of gold annually could rise as high as 200,000 oz. using an upside scenario of the ball-mill addition and an anticipated increase in gold reserves.

Regarding first production from the facility, Child envisions a preliminary three-month phase as the kinks are worked out. Then, in the next phase the engineers will sign off that all is ship-shape and first production will commence. Base-case production is targeted to be 100,000 oz. each year.

About $100 M of CAPEX will be needed to complete Stage 1. The FS will reveal more exact numbers. As mentioned, the SAG mill cost was $6.5 M and is already paid for. The land concessions are paid for. Other equipment can be purchased second-hand, which will keep CAPEX down.

Because the project is now at an advanced-stage, a number of investors and private equity companies have shown interest in supplying additional funding. Initially, the company may need to raise a bit of near-term cash. Further out, it anticipates the need for a larger debt and equity solution.

Condor recently hired John Seaberg as CFO to expedite the company’s acquisition of funding. Seaberg knows Nicaragua well. He would “Rather do business in Nicaragua than anywhere else in Latin America."

He was CFO at Calibre Mining, which has two commercial mines in Nicaragua that collectively produce 160,000 oz.  Prior to his tenure at Calibre, he was a vice president at Newmont.

Potential Impediments to Moving Into Production

People might fear several things that could get into the way of Condor Gold’s production goals in Nicaragua: the price of gold, operational roadblocks, and upcoming in-country elections. None of these are concerning to Child.

As mentioned, he believes that the price of gold will rise, not fall. Operationally, things are sailing along: The company has a fully paid-for mill and 80% of it is now in the country. A mine will be built.

From a political perspective, he believes that the current president will win re-election. The current government has been incredibly supportive of mining.  He anticipates no change on that score.

The company continues to advance its detailed exploration program at its Mestiza deposit, proximal to but not part of the main La India pit. Drilling results of late at Mestiza have been highly encouraging. Two recently announced high-grade intercepts of 4.1 m true width at 15.23 g/t gold and 3.6 m true width at 29.1 g/t gold, approximately 40 m and 85 m respectively below the surface, are particularly noteworthy. These results demonstrate a continued advance of inferred-to-indicated resource and the overall development of future feedstock for the new mill.

From an economic perspective, Mestiza is on its way to providing gold production of just over 80,000oz of gold. The deposit is eight times smaller than La India but double the grade.

It is projected to fetch a quick $80M of cash flow coming out of a single small pit from ore within 100m of the surface.

Finally, drilling continues at the Cacao occurrence, also quite proximal to the La India pit. Initial results suggest that this may be a completely preserved, highly mineralized epithermal vein system containing a half to a full Moz of gold.

To find out more, go to the Condor Gold Website