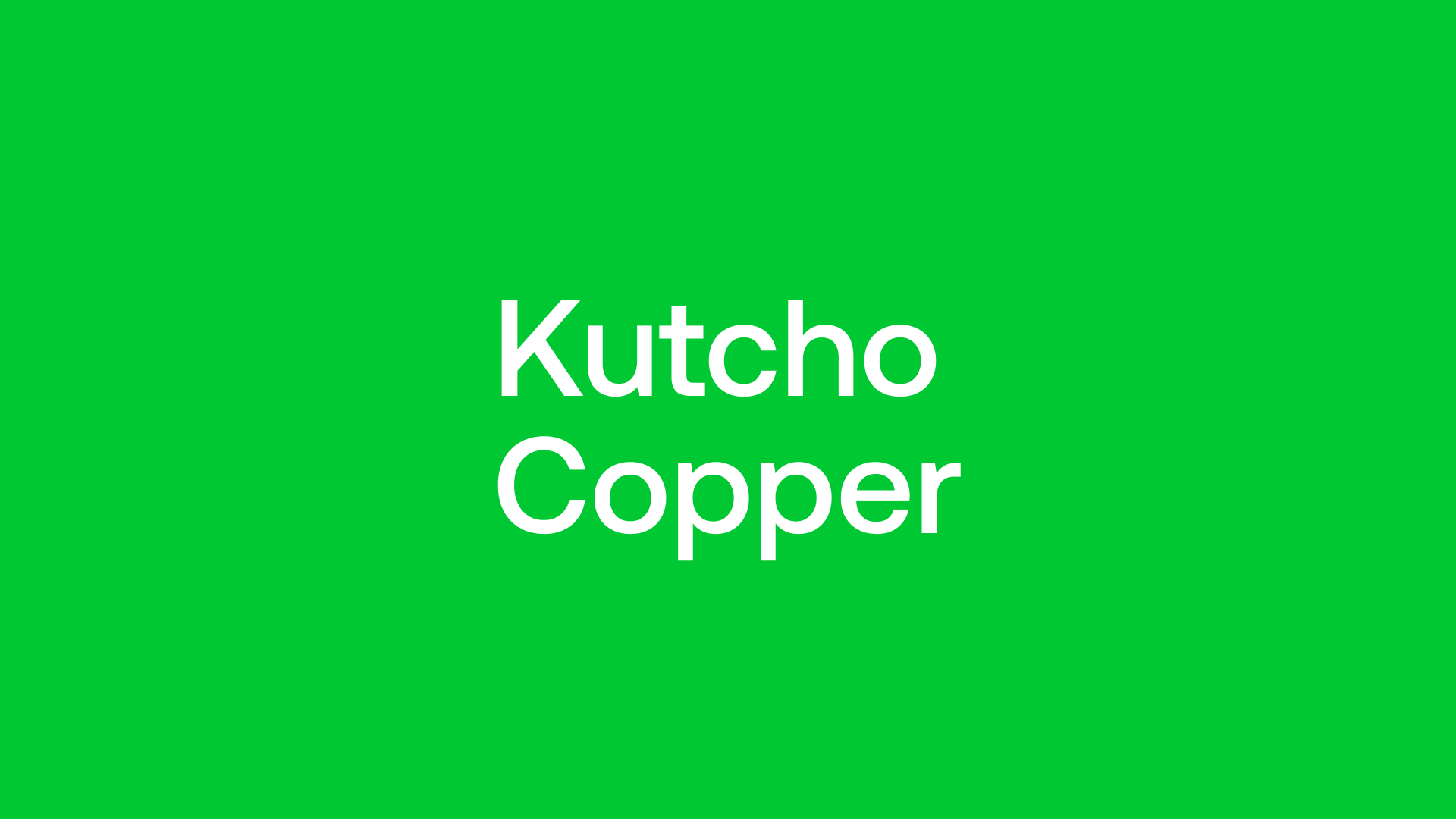 Kutcho Copper Corp. is a Canadian resource development company focused on expanding and developing the 100%-owned Kutcho high-grade copper-zinc project in northern British Columbia. The company is committed to social responsibility and the highest environmental standards. It plans to advance the Kutcho Project through permitting to the construction phase.

Matt Gordon caught up with Vince Sorace, President, CEO, and Director, Kutcho Copper. Vince has over 3 decades of experience in the capital markets. He has raised over $300M in equity and debt financing. He currently serves as the Chairman at E79 Resources Corp and is the Founder and Executive Chairman of MineHub Technologies Inc.

Kutcho Copper Corp. (formerly Desert Star Resources Ltd.) was founded in 2015 and is headquartered in Vancouver Canada. The company is listed on the Toronto Stock Exchange (TSX-V: KC) and the OTC Markets (OTCQX: KCCFF). Providence Resources Corp. is the company's subsidiary.

Kutcho Copper recently published the results of its Feasibility Study, garnering a positive reaction from the market. The company has observed a share price jump from $0.85 to $1. The company's current market cap stands at $100M. Kutcho Copper is currently trading higher than its peers from a NAV (Net Asset Value) perspective. About 98% of the company's investments are from retail institutions.

The conclusion of the Feasibility Study was a major achievement for the company. It was carried out through collaboration with the CSA Global engineering group. The company made the Feasibility Study robust by factoring in metal prices, design and construction plan for the mine, proposed capital, and M&A (Mergers and Acquisitions). The company is open to the possibility of M&A through a strategic investment or an outright takeover in the future.

The Kutcho property is located 120km east of Dease Lake in northern British Columbia. It consists of a mining lease and 46 mineral exploration claims that cover 17,969 hectares. The site is accessible through a 900m long gravel airstrip located 10km from the deposit, and a 100km long seasonal road from Dease Lake that is ideal for tracked and low-impact vehicles.

This project has a total mine life of 22 years with a strong IRR (Internal Rate of Return). Based on an estimated $1.15 zinc and $3.50 copper, the company carried out 2 sensitivity analyses along with 1 spot price across the board. This led to a $900M+ NPV on spot prices. Even with conservative estimates, the project's post-tax NPV stands at $630M with a 30% IRR.

The initial capital cost of this project is estimated at $483M. The company is currently focusing on ways to increase the value of the project and its assets. As the company approaches metrics comparable to its peers, it will be reflected in its share price. This project has a significant upside from an exploration perspective.

Kutcho Copper anticipates that it won't need to raise the entire $483M project finance. It is open to an equity-debt split capital raise. The company is backed by Wheaton Precious Metals. The company has a current cash flow of $58M along with a CAD$75M stream with Wheaton. Once Kutcho Copper achieves a 4,500t/day throughput, it will be awarded a $20M bonus payment from Wheaton Precious Metals, bringing the company's financing close to $100M with no dilution.

Additionally, the company announced a buyback from Sumitomo 6 weeks back. This helped the company get rid of the off-take, enabling it to strike strategic deals in the future. The company has also been in talks with multiple entities regarding its funding plans.

As Kutcho Copper is within the upper percentile of concentrates and sought-after in the market, it has the flexibility to raise strategic capital as it approaches project construction.

Kutcho Copper is also looking to source used equipment for building the project, significantly bringing down the capital cost. The company is also in talks with various groups for the development of the access road through third-party finance. This road has an estimated build cost of $30M. The company is looking to lease the road and place it in its OpEx (Operational Expenditure), which would further reduce the project cost.

Kutcho Copper is currently driving the project through the permitting process towards a production decision. The company is also working to generate interest around the project and demonstrate the exploration upside potential. Main Lens, Sumac Lens, and Esso Lens are the company's major deposits in this project. The company shifted the Main Lens deposit to an open-pit operation.

The Main Lens and Esso Lens reserves were covered in the company's Feasibility Study. Sumac Lens has an additional 10Mt supply at 1.5% copper and isn't included in the Feasibility Study as it was an inferred resource.

This is a low-cost production operation, and the company is currently looking to extend its open-pits. The area between the Main and the Sumac Lens has a single drill hole in between. The company anticipates that these 2 sites have trending mineralization in between with much lower cut-off grades and even lower production costs.

If mineralization is found at Sumac Lens near-surface, the company will expand the pit in its direction. This will enable the company to quickly drill off the deposit and plan a part-PEA (Preliminary Economic Assessment) or a PFS (Pre Feasibility Study) around the deposit. This will help the company demonstrate the added value from the deposit along with mine plan.

Kutcho Copper is planning to invest in Sumac Lens to bring its inferred resource into the M&I (Measured and Indicated) category. This can increase the mine life by 4-6 years. The company is currently drilling the Sumac Lens and is assessing ways to include the deposit into its model.

Kutcho Copper has been carrying out an exploration program for the past 2 months after shifting the Main Lens into an open-pit operation. This plan was put together by collaborating with the company's engineering consultants. The company plans to drill 30,000m-40,000m in the next season. This drill program will comprise both resource conversion and pit expansion along with exploring blue-sky targets.

As the Esso, Sumac, and Main deposits repeat and fold three times through the company's claimed license, the underlying VMS (Volcanogenic Massive Sulfide Ore) deposits increase in size. These deposits haven't seen any exploration activity since 1990.

Currently, the company is focused on the exploration program. This would further improve the value proposition of its assets along with share value which would directly impact the flow-through funding.

Kutcho Copper currently has 1.1Bnlbs of copper equivalent resource in the M&I category along with 460Mlbs in the inferred category. The company is looking to bring the inferred resource into M&I by drilling over the course of the next year. This would be followed by a part-PEA or PFS in 2022.

The company is looking to get permitted through a limited budget that would be included in the financing package. Once the permits are in place, the asset will appreciate in value, further de-risking the project. The company is seeking to demonstrate the overall scale of the project.

Kutcho Copper is looking to gain analyst coverage on its project. It already got coverage through Red Cloud prior to the Feasibility Study. The company is planning to generate interest in its assets through advertising and PR campaigns. It is also looking to capture the attention of institutional investors as the majority of the current investors are retail. This could potentially open doors for institutional financing in the future.

The company has received offers for institutional capital, however, it is looking to grow the asset value to a proper price point before opting for a capital raise. This would also provide an upside for the shareholders.

The Future of Copper

Copper has historically been an important metal for infrastructure development. However, in recent years, the demand for copper has grown in the battery metals, renewables, and EV (Electric Vehicles) industry. There was a recent announcement from the US government to invest $500Bn towards copper-intensive projects.

It is anticipated that the industry is moving towards a copper supply crunch in the near future. This is because the overall supply of copper and upcoming copper producers are limited in number while the demand continues to grow at a rapid pace.

To find out more, go to the Kutcho Copper Website