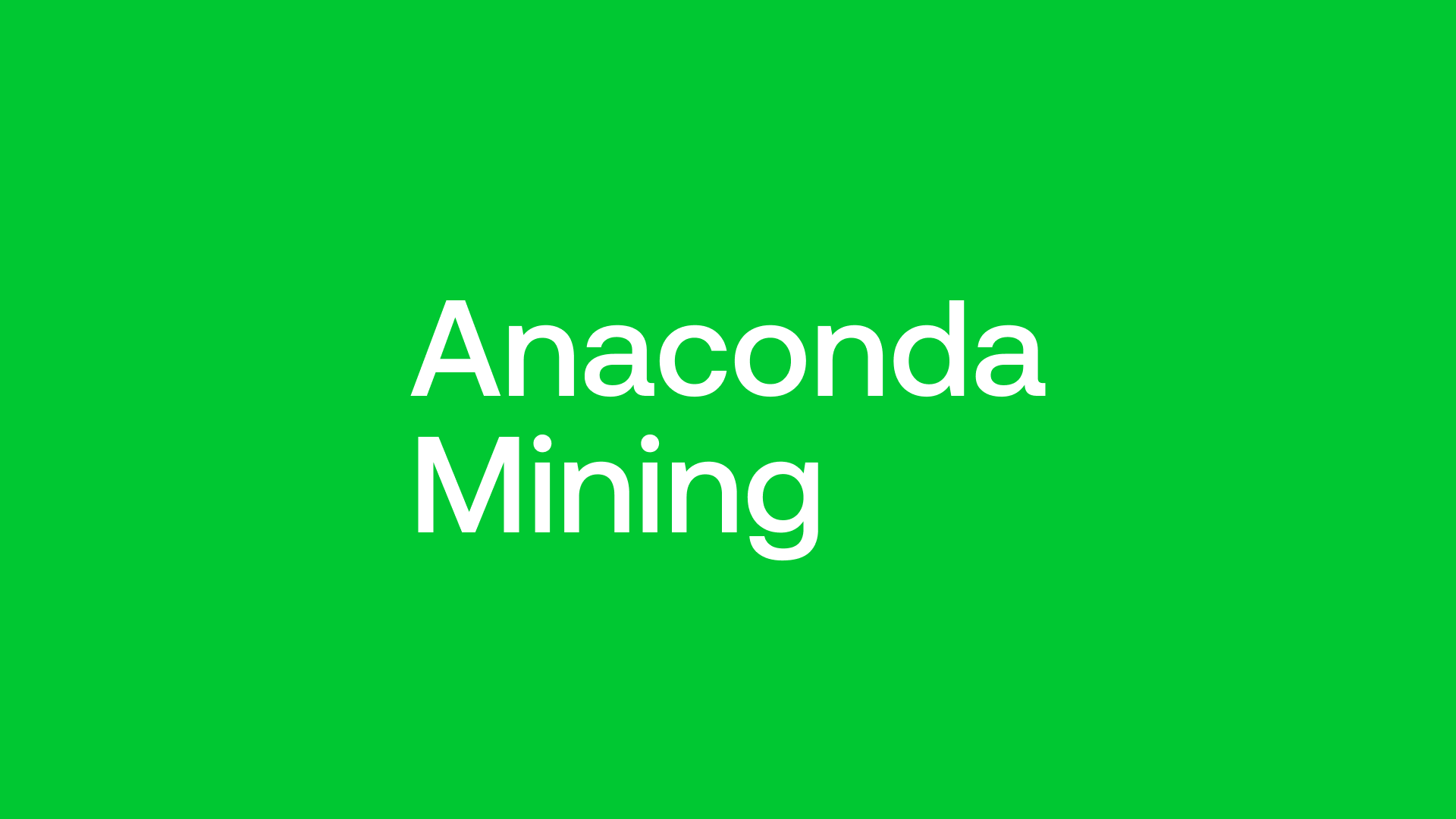 Anaconda Mining is a growth-oriented gold producer, developer, and explorer operating in Atlantic Canada. The company controls over 600,000oz M&I (Measured and Indicated), and over 400,000oz of inferred gold resources. The company's major assets include the Goldboro Project, the Point Rousse Project, and the Tilt Cove Project.

Matt Gordon caught up with Kevin Bullock, President, CEO, and Director, Anaconda Mining. Kevin is a registered Professional Mining Engineer in the province of Ontario. He previously served as the founding President and CEO at Goldcrest (a predecessor to Volta). He has over 3 decades of experience at senior levels in mining exploration, development, operations, and capital markets. He also held the position of CEO at Mako Mining. He currently serves as a Director for B2Gold.

Anaconda Mining is an Atlantic Canadian gold producer, developer, and explorer. It plans to grow its resource portfolio and production profile through exploration, and M&A. The company was founded in 1994 and is headquartered in Toronto, Canada. It is listed on the Toronto Stock Exchange (TSX-V: ANX) and the OTC Markets (OTCQX: ANXGF). Inversiones La Veta Limitada is the company's subsidiary.

Anaconda Mining is active on the East Coast of Canada. The company has limited gold production in Newfoundland along with a development project in Nova Scotia called the Goldboro project.

A Strategic Approach Towards Feasibility Study

Anaconda Mining concluded a PEA (Preliminary Economic Assessment) at the Goldboro Project. This assessment demonstrated that the asset has a strong revenue generation profile along with a low CapEx (Capital Expenditure), making it a robust project. The mine life for the Goldboro Project is estimated over 10 years with an open-pit operation. A major advantage of a 10+ year mine life is the ease of financing.

The company plans to advance this project as an open-pit operation for several years. The company opted to drill underground for future use instead of going for a capital raise. This will enable the company to generate a steady cash flow from the high-grade open-pit mine.

Planning the operation in phases allows the company to open up the deposit through 3-4 years of open-pit mining. This would provide an in-depth understanding of the deposit along with 3D modeling. The generated data can then be utilized towards designing a future underground mine that would come into play by year 6 of production.

There are several reasons for planning the Feasibility Study in 2 phases. The permitting process for an underground operation requires significantly more drilling, construction, and establishment of water inflows. This has a major impact on the project CapEx which can impact the dilution of the company.

Carrying out the study in phases enables the company to finance and build a mine and utilize the cash flow in later years of the operation. The company anticipates that the NPV (Net Present Value) of the project will be lower than the PEA as the Feasibility Study is being done in phases.

Anaconda Mining plans to conclude the Feasibility Study within the next 6-8 weeks. Following this, the company will file an EARD (Environmental Assessment Registration Document). The company wants it to be the most comprehensive EARD in the history of Nova Scotia's gold mining. This will facilitate the company through shorter review periods that typically range between 1-4 with 3-month gaps.

The company plans to submit the EARD to the government by the end of February 2022. The EARD will define the various parameters of the open-pit project along with the planned infrastructure and environmental impact. The company anticipates that the permitting process will take up to 12 months.

Anaconda Mining has seen a drop in its share prices from $0.90 to $0.60 in the past few months. This is a widespread trend observed for gold companies and the industry as a whole. As per the company, its project is timed perfectly to capitalize on the final cycles of the gold bull run which is anticipated to continue over the next few years.

Anaconda Mining anticipates that a gold price of $2,000 will bring its project to a $1Bn NPV (Net Present Value). As the gold prices continue to appreciate, it would make the company's Nova Scotia project to be the highest-grade undeveloped open-pit project located on the east coast.

Anaconda Mining currently has $8M in equity. The company does not plan to utilize the generated cash flow for its exploration pursuits. This is because the company has the option to raise funds in Canada through flow-through at a 30%-35% premium on the current share price. The key requirement to attain flow-through funding is to utilize the raised capital for exploration in Canada.  This funding will also help prevent the over-dilution of the company and its shareholders. Anaconda Mining exercised all its warrants recently and is currently a tightly-held company.

The company's planned Feasibility Study at the Goldboro Project is scheduled to conclude by the end of 2021. Following this, the company will demonstrate phase 2 through promotional material and videos.

As the company enters the construction and permitting phase, it will enter the flat portion of the Lassonde Curve. The company plans to remedy it by drilling the west end of its project. It currently has a 3Moz resource in 2 pits along with underground reserves located at a depth of 500m.

The Goldboro Project has a strike length of 1.5 km on its 2 pits along with another 1.5km strike length towards the west. The mineralization along the strike length features a similar geophysical signature to a past producer from the late 1800s and early 1900s. The company plans to carry out a drill test to gain a better understanding of the ore presence and the extent of mineralization.

Based on historical data and the geophysical signature, there are indications that the mineralization is continuous, however, the company is looking to determine whether it's located on the surface, at depth, or in between.

Anaconda Mining has drilled up to 540m at depth. The company anticipates that these anticlinal deposits offer strong opportunities down below. The western part of the Goldboro Project offers a 1km opportunity approaching a 3Moz supply at shallow depths. According to the company, this mining operation will be multi-generational.

The company plans to cut lines on its current pits in the west to carry out ground-based IP, an induced polarization survey. This survey will pinpoint the location of the chargeable mineralization with the host arsenopyrite mineral, typically associated with gold deposits. The survey will provide the exact location of the nose of these anticlinal systems as they approach the surface.

The surveys will be followed by drilling to hit these limbs and uncover any underlying pits that feature similarly-styled mineralization. The company anticipates that similarly-sized deposits could be found with a potential for multi-million ounces.

The Stog'er Tight Deposit is located in Newfoundland. This operation is currently generating the bulk of the company's cash flow. At present, the company is mining a deposit called Argyle which previously faced start-up issues. The company was successful in managing the waste development at Argyle, a cost-intensive process without ore production.

This project has a mine life of 10+ years with 14 months of mine life remaining. However, the company recently discovered another deposit in the region with mineralization called the Stog'er Tight. The company recently put out a resource at this deposit with a 70,000oz annual production potential. However, the company is only producing 20,000oz yearly, further extending the life of the mine.

The Stog'er Tight deposit features high-grade gold deposits rated at 642t at 3g/t. These reserves are located close to the mill and the company anticipates that the deposit will have 60,000oz of mineralization within the resource. It is expected that about 50%-60% of these deposits can be converted into mineable ounces with average grades ranging between 2g/t-2.2g/t. This will further increase the life of the mine by at least 2-3 years.

The Stog'er Tight deposit features a different style of mineralization compared to the company's other Newfoundland projects. However, the company has discovered an additional 4 targets with similar geochemistry and geophysics as Stog'er Tight. These deposits are Corkscrew, Big Bear, Pumbly Point, and Deer Cove. The company has highlighted these deposits in its recent press releases and anticipates additional discoveries within this region.

Anaconda Mining's current gold pricing stands at $1,550, reasonable for the long-term. The company plans to achieve a gold price between $1,600-$1,650 in 2022, which would make it a record year for revenue generation. Based on the company's estimates, this pricing will provide it $20M in free cash over the next 2-3 years. Once Stog'er Tight enters streaming, it will provide a higher grade, similarly-sized operation close to the mine site.

This cash flow will enable the company to conclude the Feasibility Study and explore project financing options to fund the development of the Goldboro Project. Anaconda Mining is strategizing its operations by having one mine in production, another being developed, and a third one being drilled as a discovery.

At the Goldboro Project, Anaconda Mining is planning a 20,000m drill program towards the west of the existing pits. The estimated cost of this program is $4.5M, and it includes a 50-line kilometer underground IP survey funded through flow-through capital. This program is separate from the ongoing operations which consist of drilling between pits along with infill drilling. The infill drilling will allow the company to grow the size of the existing open-pits.

Additionally, the company is also drilling several geotechnical holes along with water well drilling. These are crucial for finalizing the Feasibility Study and provide an understanding of the water inflows through the pit. The Feasibility Study is planned to conclude by mid-December 2021.

Anaconda Mining did not disclose any plans for potential M&A (Mergers and Acquisitions). However, the company has shown interest in visiting projects of other mining companies in the vicinity to understand the projects and collaborate in an event of potential supply shortages.

The company is open to the possibility of spin-off the Newfoundland project into a separate vehicle. However, this would be determined based on the opportunities offered and the potential for creating shareholder value in the long term.

Anaconda Mining has had over 60 meetings with various project finance groups, streaming and royalty companies, debt providers, and banks. As the project is robust from a PEA perspective and located in a great jurisdiction, the company can attain up to 60%-70% debt through funding if required. The funding could potentially come on the condition of permitting from the financiers. The company is looking to consider a capital raise once the Feasibility Study is concluded.

Anaconda Mining is looking to develop the Goldboro Project with a major focus on efficiency. According to the PEA, the ideal time to develop the underground mine is around year 6 of the mine operation, providing plenty of time for phase 2 of the operation. The company is looking to drill sufficient inferred resource once the open-pit operation starts.

The open-pit will target halo mineralization, while the underground mining will be focused on high-grade anticlinal lenses. The company anticipates that going underground with the operation can lead to a jump in grade by the factor of 2-3. The company plans to utilize the supply from underground operations as additional mill feed.

Anaconda Mining is looking at an 87,000oz operation annually for the first 5-years. Once the underground component is incorporated, the operation will approach a 137,000oz supply for the next 10 years at very low operating costs.

To find out more, go to the Anaconda Mining Website